Welcome! While Mick (the “computer nerd”) is responsible for the technical stuff, I am the author of our journal … (“such a talented woman” Mick says!). Below you will read mostly my feelings, impressions and advice for would-be RVers. Mick will add his own comments from time to time to reflect on his unique responsibilities in our RV partnership, such as sewage dumping, maintenance, maneuvering the RV, etc. (the manly duties!).

We hope our story will help you, make you smile :o) at least, and perhaps encourage if not inspire you to put your home on wheels for a while and join us on the open road.

Chapter 1: How did we ever get here?!

Several people said, “We never really thought you’d do it!” Others asked, “What made you finally decide to go? Why now?” Well, why not? And why not now?

Like many people we had often dreamed “Wouldn’t it be fun to travel the U.S. for a couple of years? Totally free to go, look, stay, play, move on, as and when we chose. Of course, when Mick was in the corporate world, and the boys were in school, it wasn’t an option. But with our home-based juice business you really can work anywhere at all, as long as you have access to a phone, plus, these days, a computer with email and fax.

A dream is all very well, but to turn dreams into goals you have to add a time frame. We also learnt that time frames can be changed, but that the important thing is to write those goals down, and commit to them.

So I first wrote “Begin our tour of the U.S. in the summer of ’95.” But the summer came and the idea seemed crazy. Life was good. We had just made National Marketing Director (the top position in our company) after working hard for almost 5 years, and we were concerned that such a dramatic change in our lifestyle could jeopardize our business.

Both Ben and Kevin were still at college – albeit 350 miles away in Lubbock, Texas, but Kevin was “only” 20, and they both enjoyed coming home. So we said, “Let’s make it next year.”

Life continued to be good. Our business organization was growing and so were our checks, but the idea was firmly planted and we began to look for RVs. Then Ben announced his engagement to Jennifer with wedding plans for December ’96 (“our relatives will need a place to stay!”).

We also started planning a 4-week vacation in Europe to celebrate our 25th wedding anniversary (“we don’t have time to uproot and sell our home, and anyway Kevin’s still in school and enjoys coming home”). We were full of excuses (and as we know in our business, “all excuses are equal”!). No wonder so many people said “We never really thought you’d do it”!

The summer of ’96 was wonderful! We spent 4 glorious weeks visiting 7 countries in Europe (just like American tourists!). We celebrated Mick’s 50th birthday at our vacation home in Spain, and 3 days later our 25th wedding anniversary in Paris. 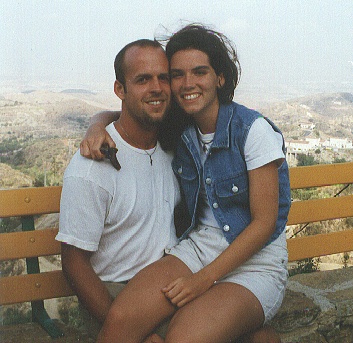 Ben and Jennifer graduated from Texas Tech and were married on December 28th, before moving to Vail, Colorado. Life was very good!

The following year we continued to travel a lot (sans RV!): Colorado in February, St. Louis in March, south Texas in April, back to Colorado in June (suddenly Colorado had an even greater pull on us than ever?!). August saw us in Georgia for a bootcamp training weekend at Padgett Farm (640 acres), followed by a vacation on Hilton Head and St. Simon’s Islands.

Suddenly the summer had passed and our Journey of Discovery still didn’t seem any closer. We had read an excellent book, which we recommend to anyone considering full-time RVing: “Living Aboard Your RV” by Janet and Gordon Groene (McGraw-Hill). To be honest, this book made us question whether we really did want to do this anyway! But, of course, if we didn’t, we’d probably always live to regret it. Even if we hated every moment (and I really didn’t think we would!) we could look back and say “Well, at least we did it!”

September came. Mick & I continued to talk about full-time RVing. Suddenly I realized that if this was ever going to happen we would have to make it happen. So we agreed to at least put our house up for sale. If we couldn’t sell it (2 houses across the street had been for sale for 2 years) we obviously weren’t meant to leave just yet. However, if it did sell …..

If you’re interested in what happened next, read on …