October 25th 1998: Have we really been full-time RVing for almost a year? Well, what a year it’s been! I had planned to keep a detailed journal, but somehow there just never seems to be time. So, with Mick’s help, I’ve been scrambling to fill in the many missing pieces. We had planned to travel for a couple of years before settling down, but we’re having so much fun, and still have so many places to visit, that it may well be for 4-5 years. 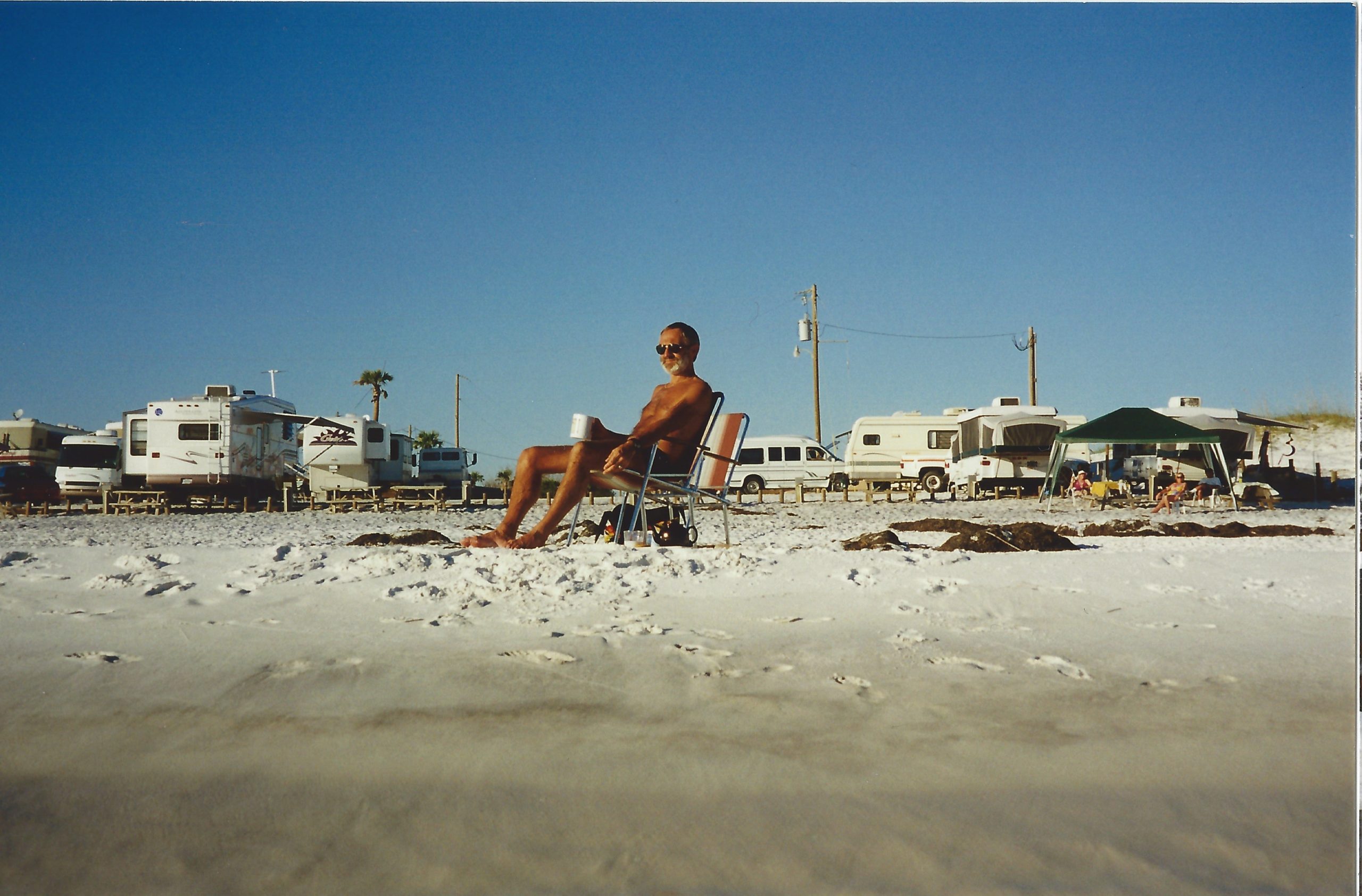 Today I’m sitting on the beach near Destin, Florida (there’s Mick!). We arrived on Monday for one night on our way back to Dallas, but it’s so beautiful we’ve decided to stay for three! The Holiday Travel RV Park, about 10 miles east of Destin, is right on the beach; we look out through our bay window across the Gulf of Mexico. The sun’s shining, the sky is blue, and the deserted beach is powdery white sand. 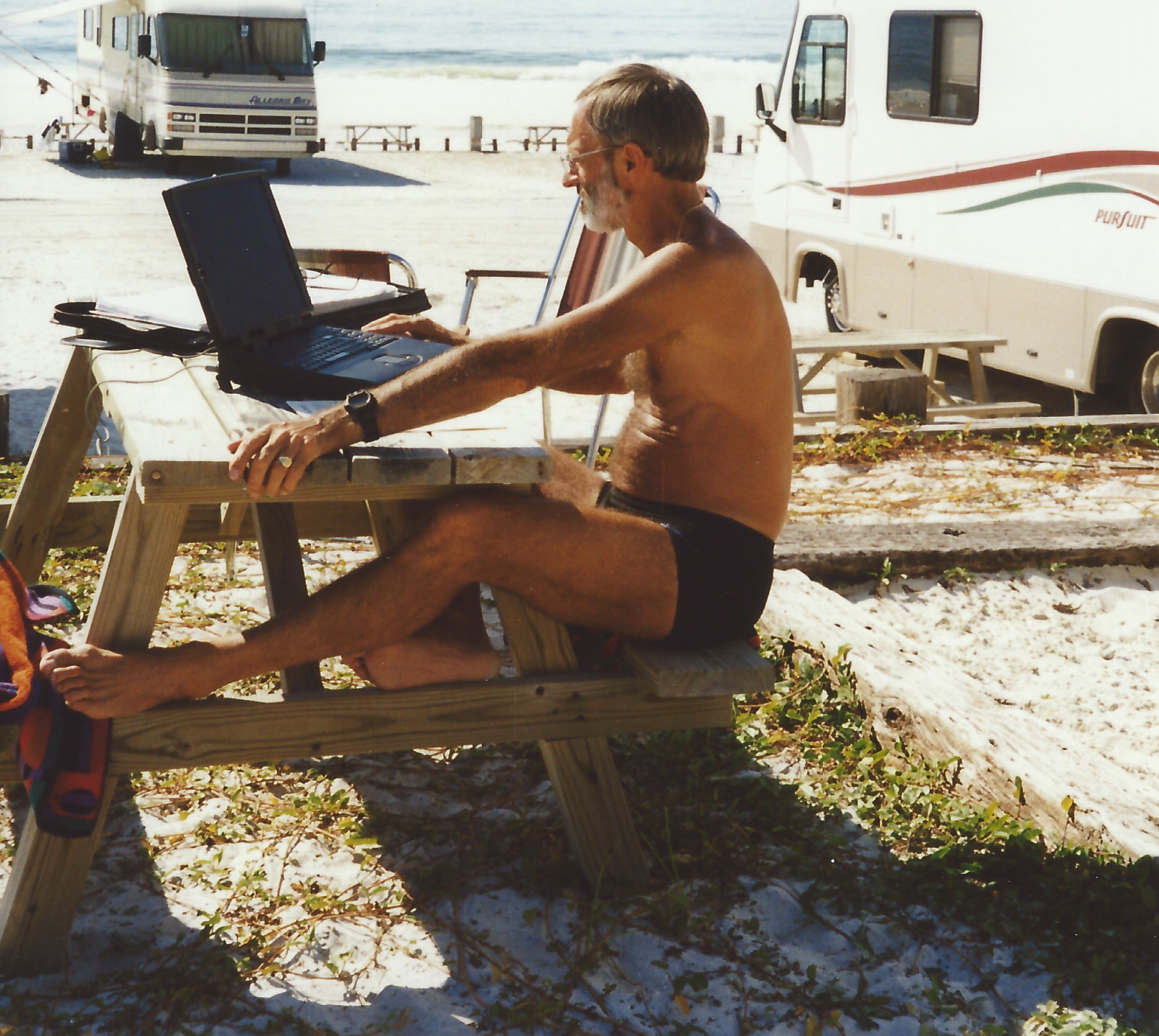 Here’s Mick “at work” on the computer (some office!) and enjoying his afternoon cup of tea!

This has been a fabulous trip. We drove from Dallas to Memphis, TN, for our Leadership Conference, taking our good friend Anne Bulow from Denmark with us. We parked up in Tom Sawyer’s Mississippi RV Park and promptly checked into the Crowne Plaza for 3 nights (relative luxury!). Meanwhile, Mike, Sheri, Mark & Melinda, also attending the Conference, “borrowed” our home!

After a great Conference – we had 30 of our group there – we set off for Frankfort, KY, to meet with one of our new groups: Doris, Merrlene, Jim and several brand new people. It was a very productive few days; we held two Health Nights at the Republic Bank, and Mick spent a day with Jim, who ended up winning the company’s Fast Track contest and $1,000 bonus! This was our first time in Kentucky, and it reminded us very much of England (though the weather was beautiful!)

From Frankfort we drove south to Atlanta, GA, where we spent a night at Stone Mountain – a huge park! – then on to Lake City, FL, where we left our 5th Wheel and drove on to Key West. We spent a fabulous week with Norma, Susan and 8-month old “Boomer” at their condo. What a remarkable place Key West is, and Blue Heaven is a very special restaurant, with such an appropriate name — a must visit if you are ever there. It has a unique “ambience”: a very simple place with primitive but colorful furnishings, and chickens, roosters and cats wandering around their restaurant patio. 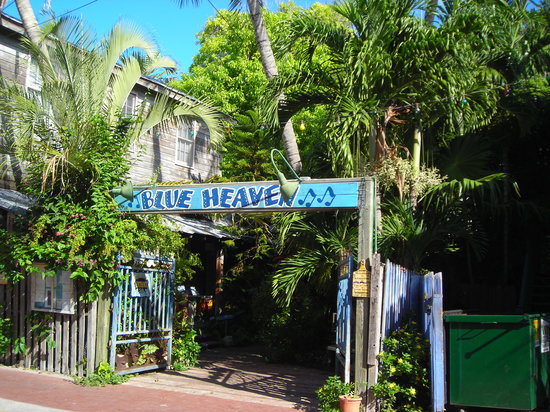 Blue Heaven’s “Rooster Graveyard” features the burial plots of several of Ernest Hemmingway’s own roosters; he refereed cockfights right there. Above all, the food is outstanding, yet inexpensive.

The highlight of the week for me was the day we spent on the water. We sailed out of Key West Harbor with our skipper, Wayne, dropped anchor and went kayaking around the mangroves while Wayne gave us an interesting lesson on the formation of the Keys. Later in the day we went snorkeling and, although the fish weren’t quite as spectacular as those in the Caribbean, it was lots of fun.

After our week in Key West, we spent a weekend on Marco Island in the Radisson Suites. On the Saturday afternoon we rented a “Wave Runner” and had a fabulous time racing around the bay shrieking and hollering like a couple of kids! Monday arrived all too soon and it was time to continue north through Venice where we met with Nancy, another new team member, who was visiting her mother.

Back in Lake City, our 5th Wheel in tow once again, we headed west (after one missed turn – I was driving this time!) towards Destin. On the way (at a small liquor store) we were recommended a seafood restaurant, and, sure enough, The Back Porch proved to be a really great place for a good meal right on the beach, the breakers illuminated by the restaurant’s floodlights. These three days in Destin have been wonderful but, reluctantly, we finally have to head back to Texas.

And so, here we are back in Dallas. We spent a very pleasant evening with two doctors in Baton Rouge, LA, and also looked up our old friends Jay and Teri, whom we hadn’t seen in 4 years. It was great to see them again. We took a slight detour north of Houston to Spring, TX, to see our friends Debbie and Steve. We met them in Walmart’s parking lot and followed them back to their house, where Mick did a splendid job of reversing into their driveway – another all time first! We connected to their electricity and spent a pleasant night right there, after having their children and neighborhood friends come to “visit” – they were pretty amazed!

It’s much cooler and wet here in Dallas. Mick’s been looking forward so much to playing soccer again and is very frustrated that his games have been rained-out. He’s played only 2 out of 10 games this season. Perhaps he’ll find a team in San Diego this winter?!

And now, three great weeks of business and fun here in Dallas are over. We’re looking forward to spending the winter in southern California, punctuated by trips to Colorado for Thanksgiving and Christmas, and four weeks in Australia in February (without 5th wheel!)

Thanks for joining us. I’ll be updating this journal soon, until then…