Our trip from Colorado through Jackson Hole, Yellowstone, Glacier National Park, then to Washington and Mount Rainier, was spectacular.

Our first trip to Yellowstone in 1987 was memorable, but once you’ve seen Old Faithful, the geysers, and smelt the “rotten eggs”, well, once was enough for us!

This time we elected to take the “high road” on the east side of the park. As “green” RVers it hadn’t occurred to us to check whether the road was suitable for big rigs … it isn’t!

A steep, narrow, winding and very bumpy ride kept our nails short, but it did offer a spectacular view of Yellowstone’s “Grand Canyon”. Next time we’ll be in a car!

The Grand Tetons were as magnificent as ever, and the weather really cooperated. Grand Tetons RV Park in Moran Junction, WY, was a perfect headquarters for our stay there. 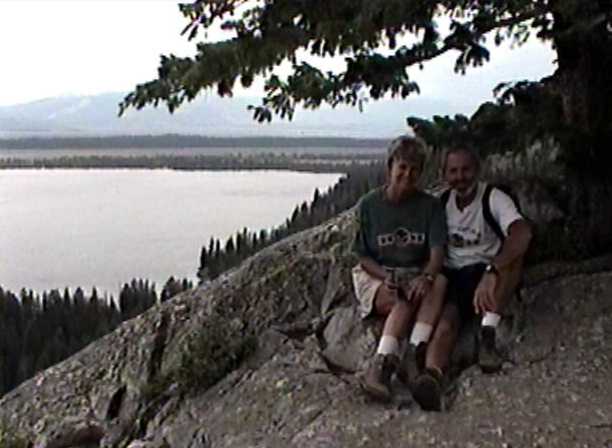 Hiking in the Tetons was great fun and good exercise (as always). There were many highlights, but “Jenny Lake” was special, for some reason!

In Montana we stayed at the Helena Campground, in Helena, and Whitefish RV Park in Whitefish – both were excellent.

White water rafting in Glacier National Peace Park in Montana was incredible, as were the many hikes we took up the mountains. Sayee Pass and other trails afforded some of the most spectacular landscapes anywhere in the world, but the highlights alone could fill an entire book! Suffice it to say that if you haven’t been there, you really MUST! 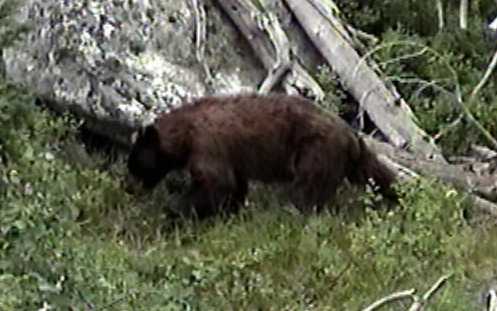 The most exciting experience was seeing a bear on the trail at close quarters — fortunately she was alone and more interested in foraging than bothering us. 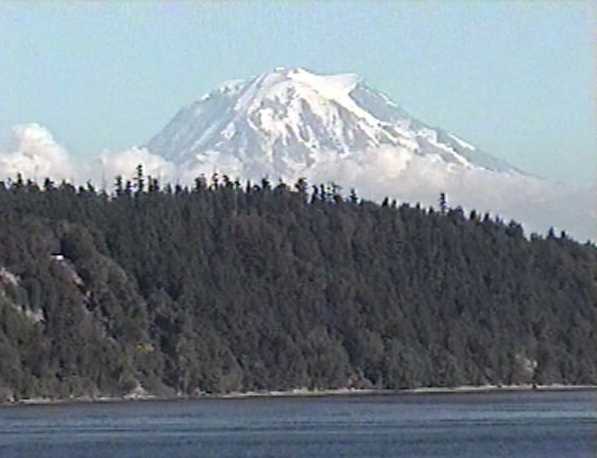 Mt. Rainier in Washington is an awesome place to visit and the site of this beautiful mountain made the view over the water at Gig Harbor even more spectacular.

While staying at the Gig Harbor RV Resort, (well located with very friendly staff), we worked with Betty and her group in Tacoma for a week. Then it was off to “Young Life” camp in Packwood — what an experience! 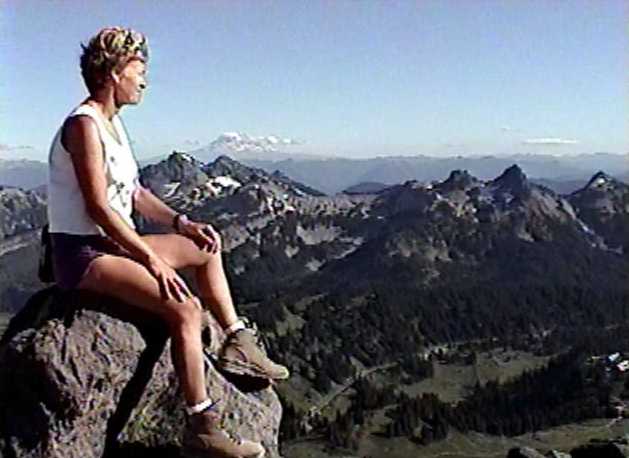 Camp was run by our great friends David and Kelly Pritchard — with most of their 7 children in attendance. Following one night at camp, we moved on to the Pritchard’s home in Centralia, WA, where we “lived” in the church parking lot next to their house. This was another all-time first: hooking up to a friend’s water and electric … and it works! (But watch out for low-hanging telephone cables…!) 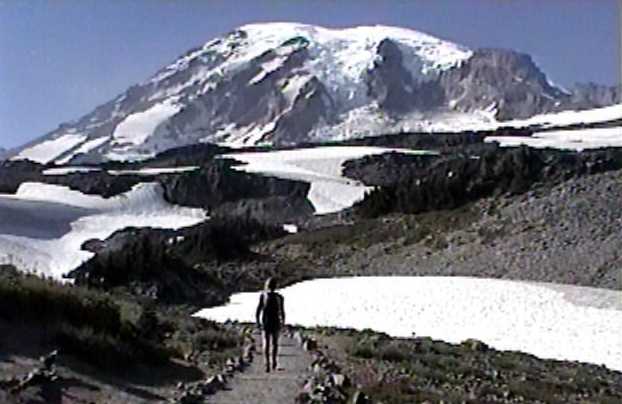 While at Packwood we went for a beautiful hike up Mt. Rainier — the highest trail from Paradise Inn is snow-covered even in August.

We were blessed. It was a lovely, clear day and we could see all the way to Mt. St. Helens.

August 22nd, 1998:
As we left the Pritchard’s this morning, we noticed that one of the truck tires was flat. We stopped at Les Schwab to put air in the tire and found a large nail imbedded in the tread. It was already 9.30 a.m. and we had a long drive ahead of us to get to Medford, Oregon, by 5.00 p.m., so we decided to risk it! Some 30 minutes down the road, a car we had passed earlier came by honking his horn and pointing. We pulled over and found one of the storage compartment doors open, overlooked at the dump station; two more firsts — finding a dump station after parking at a friend’s, and failing to “batten down the hatches”. Fortunately it wasn’t serious, but I was very upset when I realized that the one thing I had lost was the beautiful bird box that Ben made for my birthday. A labor of love and it was gone.

North of Medford, OR, we met with two couples in our business for a very pleasant meal and good conversation. Next day, the morning’s priority was to get the tire repaired. Walmart – which has become our favorite store – came to the rescue. We were able to stock up on toilet rolls, chemicals, video tapes and have a Mocha while they fixed the tire. We had the truck washed by a soccer team in the parking lot and I gave the coach an audio tape! 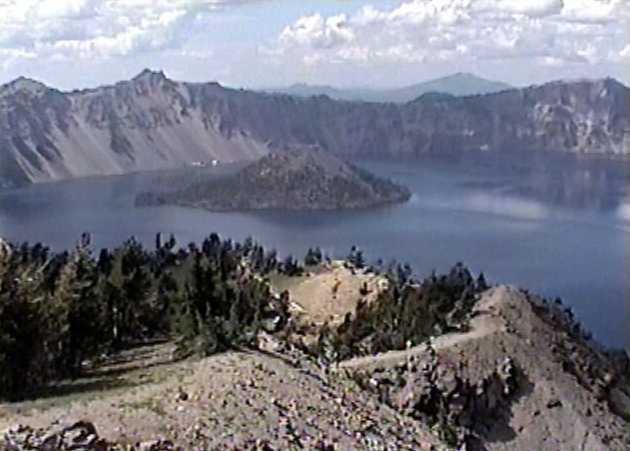 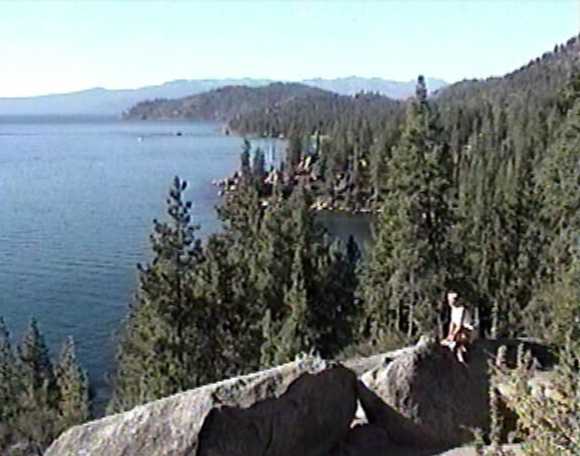 We continued south to Sacramento for a short stay while we met another prospect for our business before heading east to Lake Tahoe; we’ve heard so much about this place, what a pity we cannot stay longer. We really must plan our trips better in future to have more time in each place before we have to move on. It’s going to take time to slow down our pace; perhaps we have to convince ourselves that we are semi-retired?!

Anyway Lake Tahoe proved to be everything we had heard and much more. Coachland RV Park in Truckee, CA, just north of Lake Tahoe, is a really beautiful park.

“A Day In The Life of a Nomadic N.M.D.” (National Marketing Director) Most Americans think of the British taking tea at 4.00 p.m. They don’t realize that traditionally most days start with a “cuppa” in bed, known as “early morning tea”, even if it is 8.00 a.m.! By 9.00 a.m. we’re up and enjoying our “Complete” breakfast. Next, check voicemail, though today we’re out of the cellular service area, so that will have to be done from a pay phone.

We swing by the office, partly to pay for an extra night as it’s so beautiful and there is so much to see, but also to follow up with Daisha – she runs the office and we gave her a tape yesterday. She winters in Florida where she’s a massage therapist. She listened to the tape and is “open-minded” but undecided, so we left her a business card (some will, some won’t!) Next we check our messages, sending some replies and make a couple of calls — Sue Pohly wants to order our product for her father, and Linda Barclay is ready to become a customer. 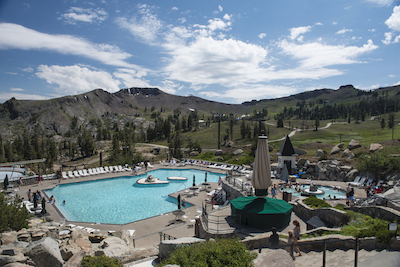 Now it’s off to a mail center to make copies of doctors’ letters to send to Kentucky. After a bagel and Mocha in Starbucks, we head out to Squaw Valley; we hike 2-3 miles up to Shirley Lake, climbing over rocks, following little piles of stones, admiring beautiful views while keeping to the left of the creek (as instructed). We continue to the top: High Camp, 6200′ and what a surprise – a swimming pool, hot tub and Olympic ice rink (site of the Winter Olympics)! We take the cable car down, drive the north western part of the lake and back to the RV park about 6.00 p.m. Mick goes for a long bike ride, I go to Safeway and cook spaghetti bolognaise for supper. After a relaxing meal, I check voicemail one more time and go to bed at 11.00 p.m. What a great day!

Well, the rest of our trip was just as good, but we needed to be quick, so we headed east towards Utah, stopping in Wendover, NV, “home” of the famous Bonneville Salt Flats. At Park City we stayed at Hidden Haven Campground, a nice park in another beautiful area, with great hiking (we managed just one).

Then we drove the rest of the way into Colorado so we could meet up with Ben, Jennifer and Kevin for the Aspen Triathlon/Duathlon! We stayed at Aspen-Basalt Campground, Basalt, CO, where the hot tub and pool proved to be a Godsend the next day, after another successful competition for all of us. The two nights there were “interesting” – five adults and two dogs (our Sacha, who lives with Ben & Jen, and Chelsea, Ben’s cocker spaniel), breaking one of our cardinal rules for our RVing lifestyle: no “kids” and no “dogs”! It was really fine — and on Sunday we headed for Avon and Beaver Creek East parking lot. We parked the RV there, with permission from security (arranged by our wonderful daughter-in-law, who has a lot of influence in the town of Avon), sleeping there at night and spending days and evenings at Ben & Jen’s condo. 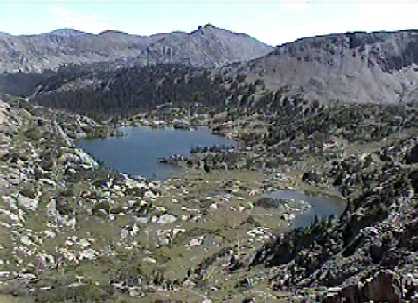 While in Colorado we had one more good hike, this time with our good friends and business partners from Dallas, Wayne and Joan, who own a vacation condo in Eagle Vail.

We hiked to Missouri Lakes, south of Minturn — a good, day-long hike in some of the best scenery Colorado has to offer. Even the dogs had a great time!

Before leaving Avon, we raced the “Fall Foot Race” – a 5k/10k race at high altitude with very steep hills. The course included the highest parts of the Avon Tri./Du. we completed in July. Although this was my slowest 10k ever, it was really good and Ben only beat me by a minute! Jenny and Jennifer had great races too in the 5k. Kevin was working, and we let him “rest”, as he was the only one of us who had completed the High Country Triathlon Series – both Tri’s. – while Ben & Jen did one Tri. and one Du., and I did both Du’s.

So finally, after a fabulous trip, we headed back to Dallas, where the heat wave was continuing. We arrived on Sep.10th and to our surprise we found it quite cool – we had brought the weather back with us. Maybe that was why everyone was so pleased to see us!

Our stay in Dallas would be another short one, before heading east again. We were about to complete a stretch that took us from Seattle, Washington –the far north west — to Key West, Florida — the southernmost point in the continental USA, and almost as far east as you can go!

In my next chapter you can see one of our favorite campgrounds, right on the beach. Read on…