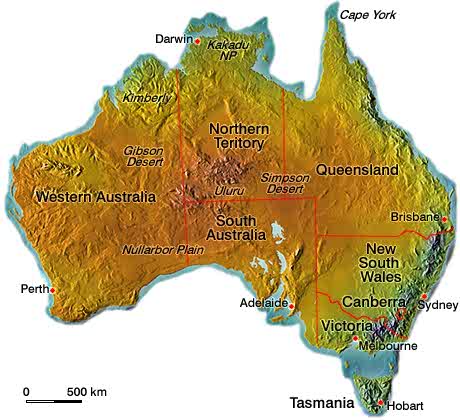 March 16th 1999 (we’re back!): I’m a firm believer in having written goals, and one of my goals for many years has been to visit Australia. Well, now we’ve “been there, done that”, as they say, and I can’t wait to go back! Although this entry in my journal is long overdue, I simply must record the highlights of our trip.

We had four glorious weeks downunder, but it wasn’t long enough. So much to see and do, such a vast country and such friendly people! Now, as I turn the pages of my photo album, I relive those special moments, which began when we landed in Sydney after a long, 14-hour flight from Los Angeles … 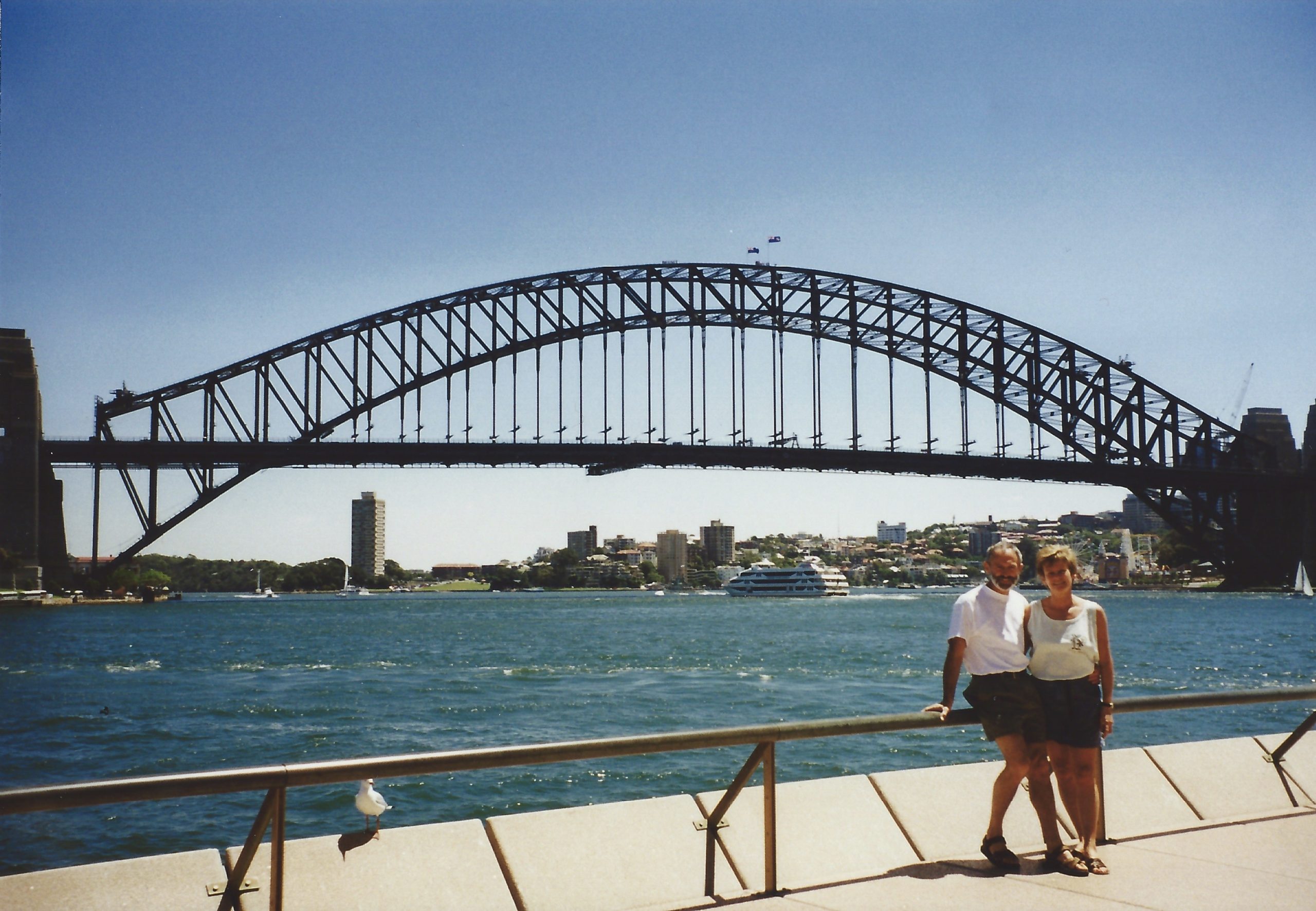 The first surprise was no jet lag – probably due to the “extreme health” we now enjoy. In spite of a 19-hour time difference, we arrived at The Land Mark Park Royal around midnight, slept for 8 hours and were ready for some sightseeing. Under cloudless blue skies, we saw the Opera House, the Sydney Harbour Bridge, Darling Harbour and generally reveled in the fact that we really were there!

And if we had to give a Health & Wellness presentation in Parramatta the very first evening, what better way to get there than by ferry with Marcia as our guide? Here we met Cheryl Stambolis, and thus began the first of many friendships that would continue during the next few weeks.

The following day we “moved in” with Marcia in Bondi Junction (thanks, Marci, for such wonderful hospitality!) and then, after giving a seminar in Dee Why, we set off for a weekend in Canberra, the nation’s capital. 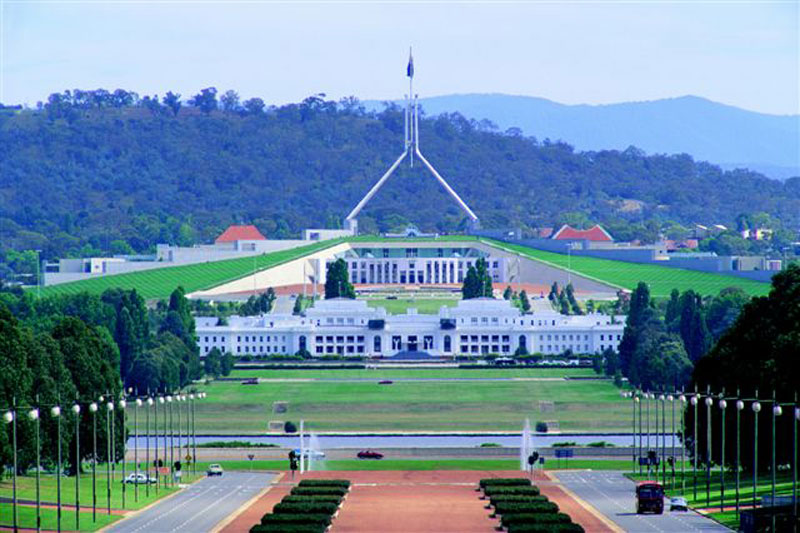 David Thrum, a friend from Mick’s IBM days, invited us to stay the night, drove us around this beautiful capital city and introduced us to some excellent local cuisine. He even found us some kangaroos for a photo shoot on The Royal Canberra Golf Course! On Sunday we had lunch with Ian and Carole Thompson, friends of Sharon and B.J. in Dallas, who couldn’t wait to get started on our nutritional product – Sharon’s been waxing lyrical about it for more than 4 years! Later that day we found our way to Richard and Robyn Willimott’s home – my second cousins, though we hadn’t met in more than 30 years. Again, they made us so welcome and showed us more of this wonderful city. 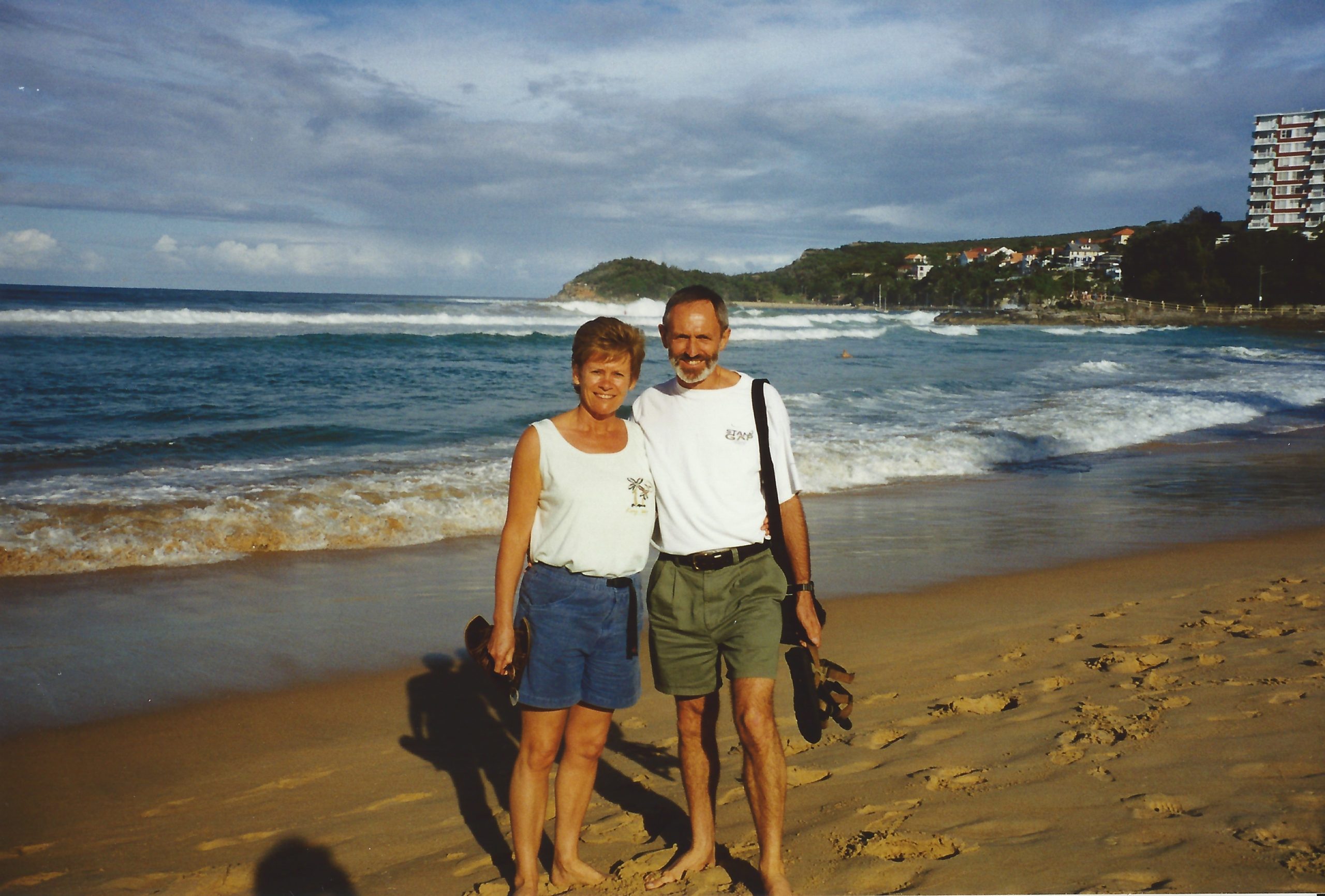 On Monday it was back to Sydney and a Health & Wellness presentation in Cheryl’s home. During the rest of the week we conducted a number of health seminars and trainings, and also explored further afield. We had afternoon tea on Bondi Beach, watched the surfers in Manly, and made our way up to Collaroy where we met with Karon, (a friend of Cheryl’s) and some of her friends, all with a keen interest in health and nutrition. 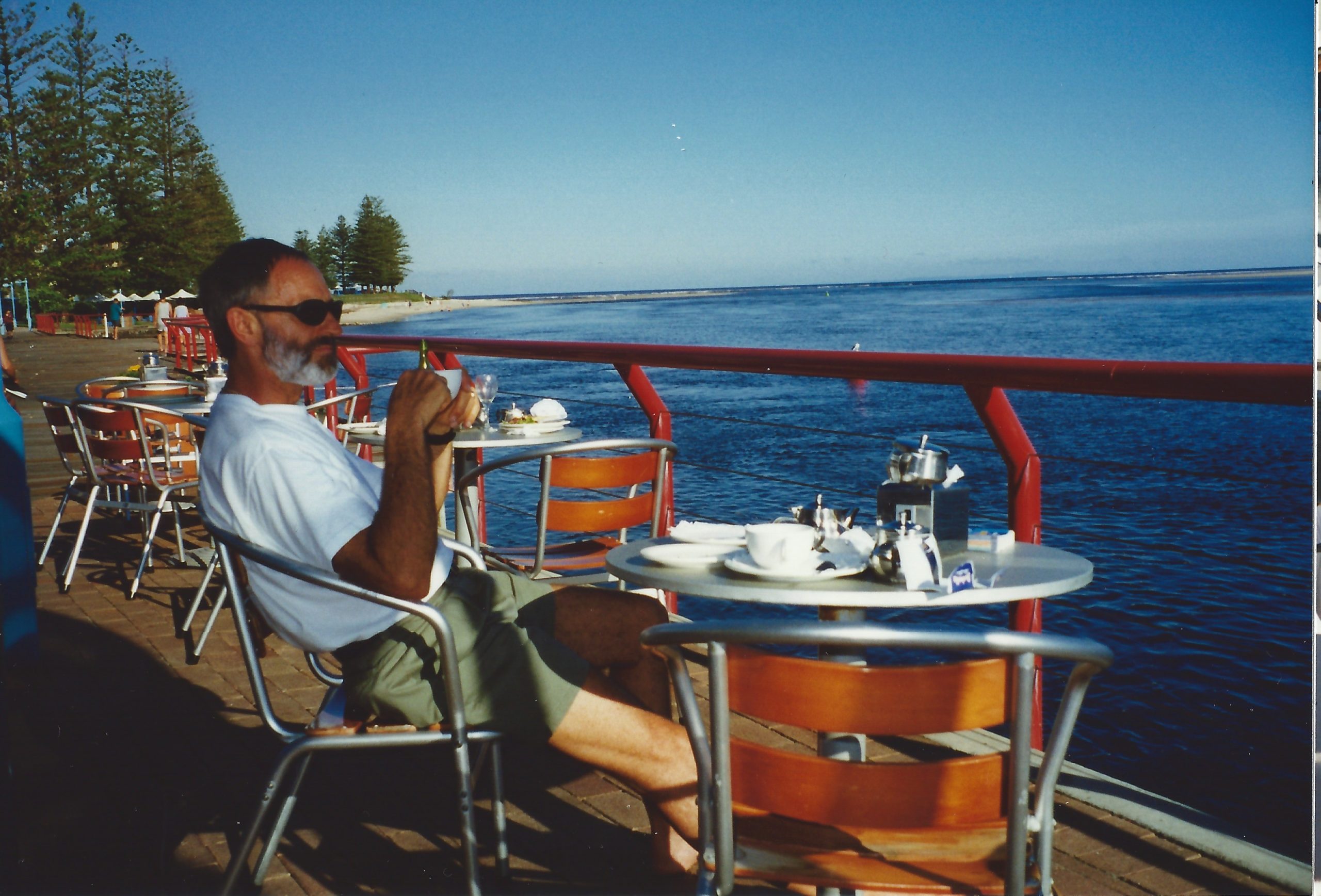 Talking of nutrition, one of our lasting memories will be the excellent fish and chips (just like back in England!) and the readily available “tea”, i.e. boiling hot, in a teapot, with cold milk in a jug, served on a tray “English-style”! The beaches, marinas and sunsets were also magnificent. 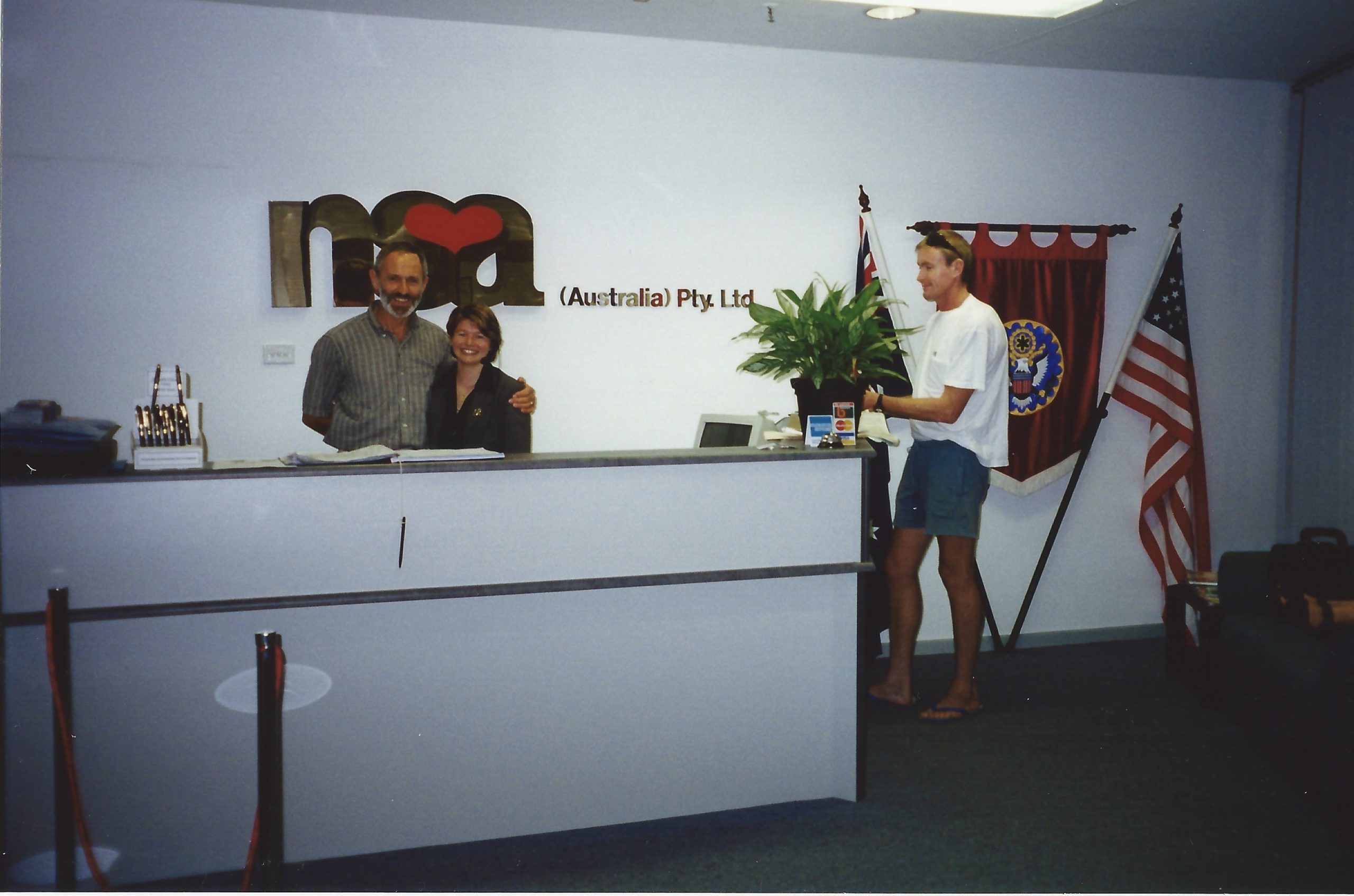 On Friday we got to see where it all happens – we visited our Head Office in Newcastle. Again everyone was so welcoming. After giving a 2-hour training to about 40 people over lunch, we were given a guided tour of the city by Ray Connell and Peter Dewhurst, the Master Distributors in Australia. Thanks, guys! 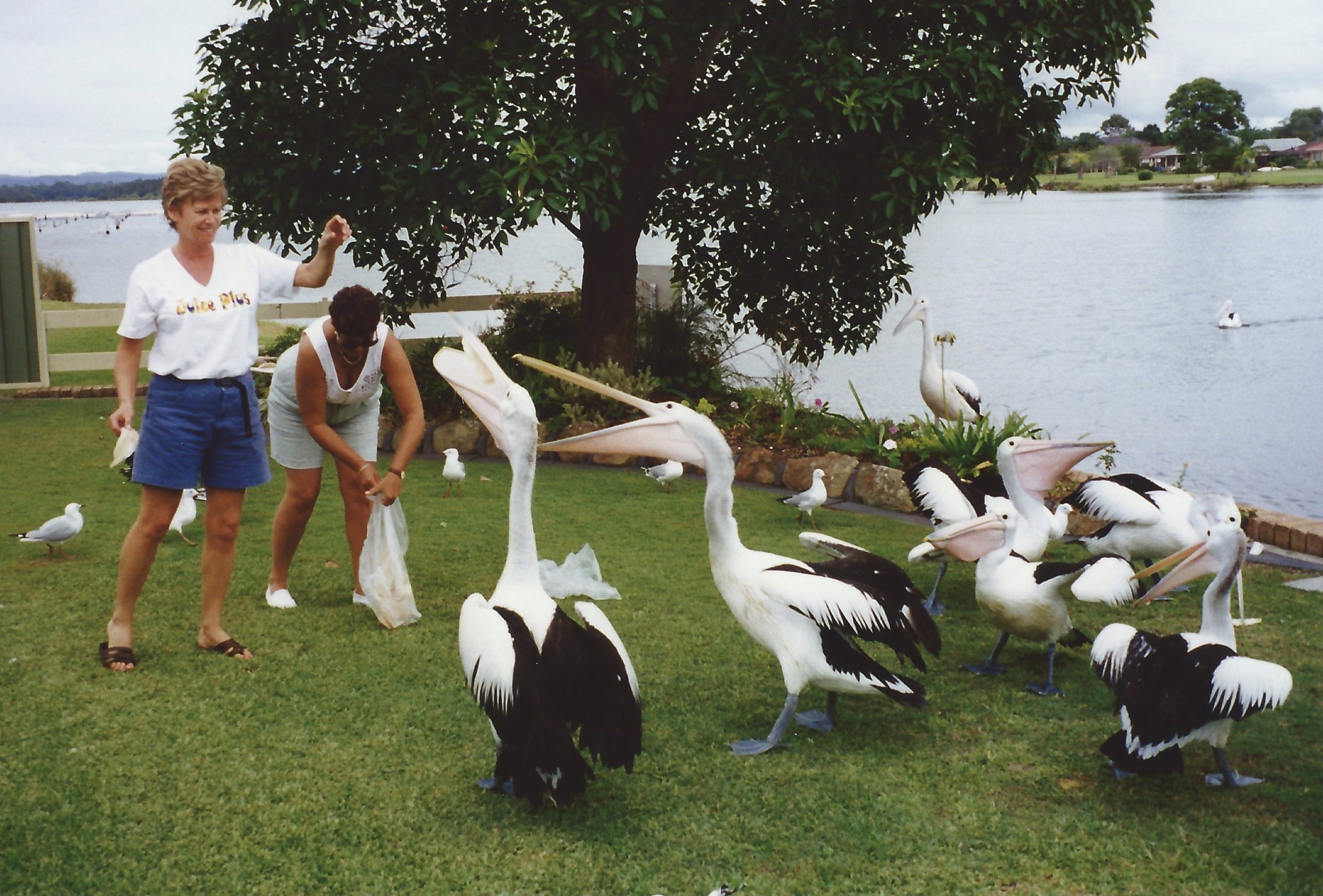 The weekend was fabulous. Helen Cramp lives in a beautiful home “on the water” in Tuncurry. She and Bob own a 33′ boat and we spent much of the time on the water, or eating fish, or feeding the pelicans that wandered around their yard. Helen was introduced to us by friends in Dallas about a year ago when we were asking “Who do you know in Australia?” Thanks to much help and support from our good friend Rachel Harries, Helen is now one of our Sales Coordinators and a great asset to our team!

While with Helen and Bob, we visited Smuggler’s Cove: a Caravan Campground owned by their friends Michael and Alison Peters. The RV in Australia is called a “caravan”. This was a large, beautiful resort with a “pirate” theme, a great place for the family. When we go back to Australia and rent a caravan, we look forward to staying at Smuggler’s Cove and many other super places like it. Caravanning is really taking off down-under. 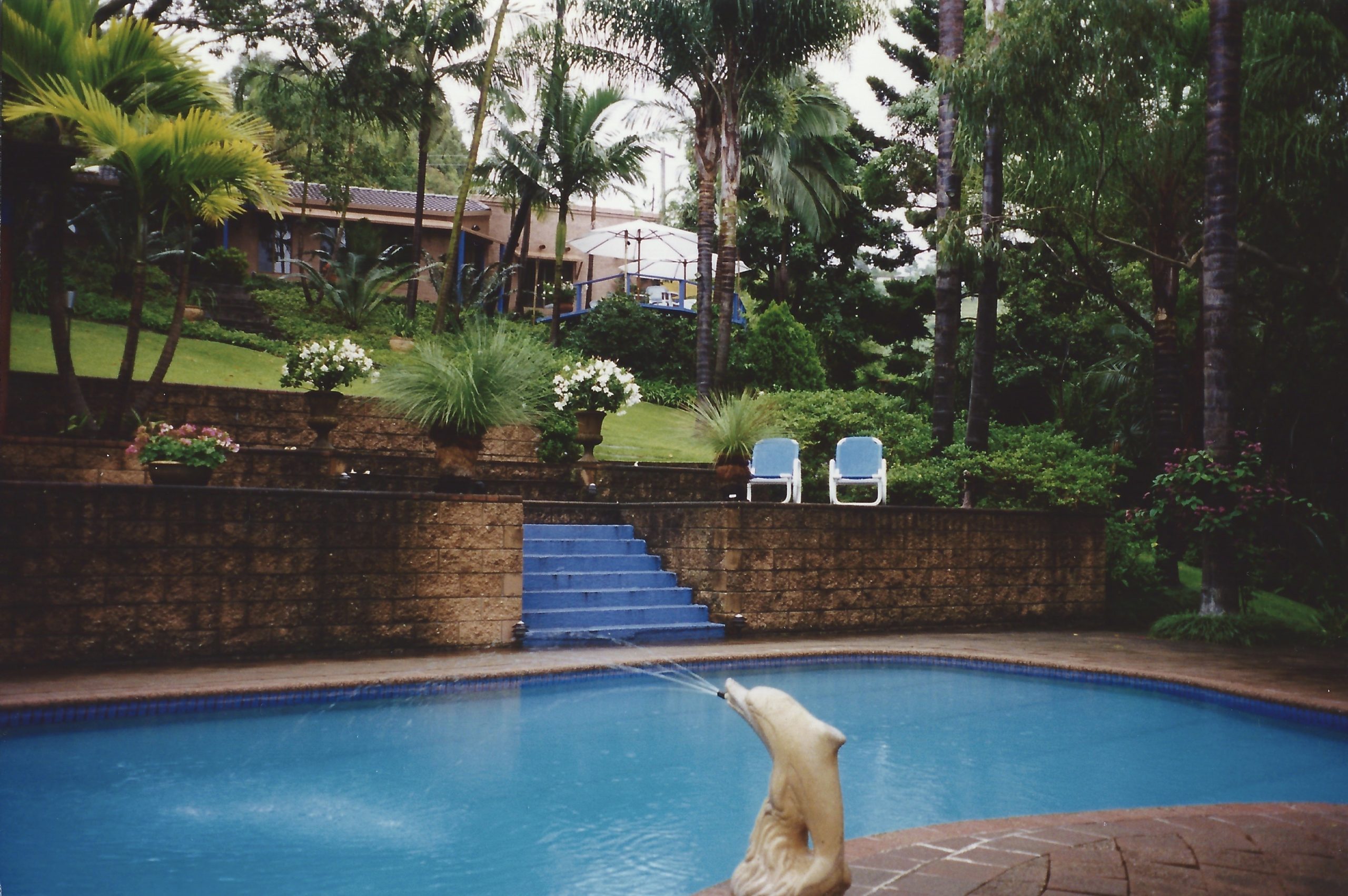 A little further up the coast, in Coff’s Harbour, we found a fabulous B & B – “Santa Fe”. The owners were quite delightful, and very interested in knowing more about our business, and now they, too, are taking our product.

We stayed with Magi Graham, yet another ex-IBMer, just south of Surfer’s Paradise, where we gave a lunchtime health seminar, and later that evening we were guest speakers at a business meeting at the Marriott in Brisbane. The following day we made good use of the hotel’s Business Centre, catching up on emails, faxes, copies, etc. Email was certainly a challenge while we were away, though we soon learnt to seek out those wonderful little Internet Cafes. 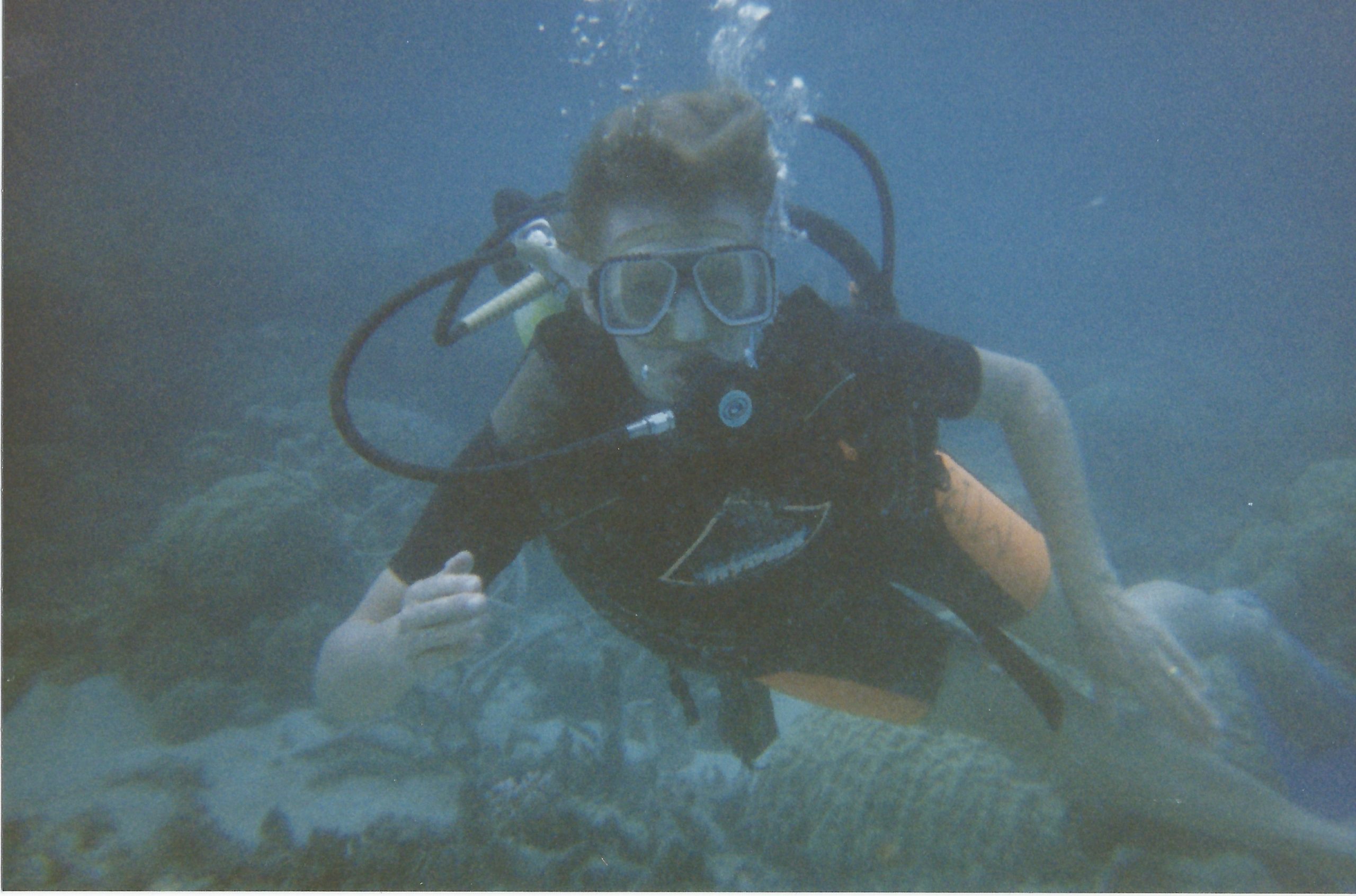 We continued up the Sunshine Coast and the Gold Coast – Australia certainly offers some of the most beautiful beaches we’ve ever seen. After a night with yet another second cousin and his wife, Brian and Denyse, we backtracked to do some sightseeing around Brisbane before flying north to Cairns for a well-deserved rest!

Another of my goals for many years has been to try scuba diving, and what better place to start than The Great Barrier Reef! We stayed in Port Douglas and arranged a day’s trip out to the reef on a small boat called The Aristocat. After an hour’s introductory lesson, I cast my fears aside, donned the appropriate gear and disappeared into the depths of the ocean. There’s a whole new world down there, and I spent 20 minutes admiring exotic fish and fancy coral that I had seen only in picture books. Too bad that Mick opted not to join me!

During the next couple of days we took a ride on a river train, hiked through the rainforests of Queensland, and visited a koala sanctuary. Yes, that’s me cuddling a koala, another childhood dream fulfilled! We took the scenic railroad up to Kuranda, an aboriginal community, where we visited a nocturnal wildlife museum and a beautiful butterfly house. 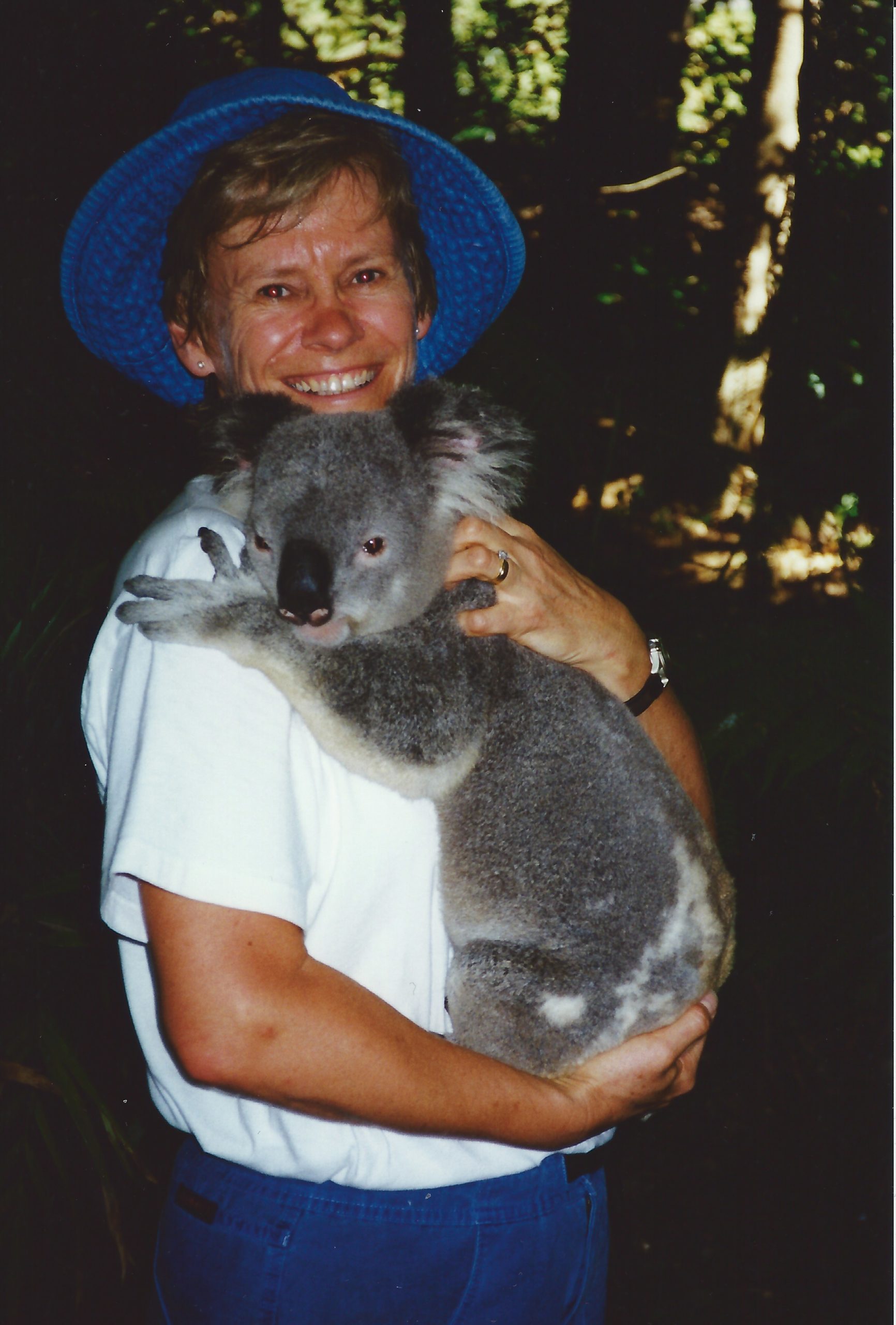 Having travelled back down on a cable car, we visited the aboriginal museum at Tjapukai, where a group of aborigines gave a wonderful display of traditional song and dance, entertaining us with the legendary “didgeridoo”.

From Cairns, we flew over Ayers Rock via Alice Springs, to Perth, Western Australia – roughly equivalent to flying from New York to San Diego. Our team there is the result of a “chance” encounter on the Internet and what a welcome we received! Judy and Dave opened up their home — they have a delightful family. We were guest speakers at several events over the next few days, helping to spread the word about good health through nutrition. 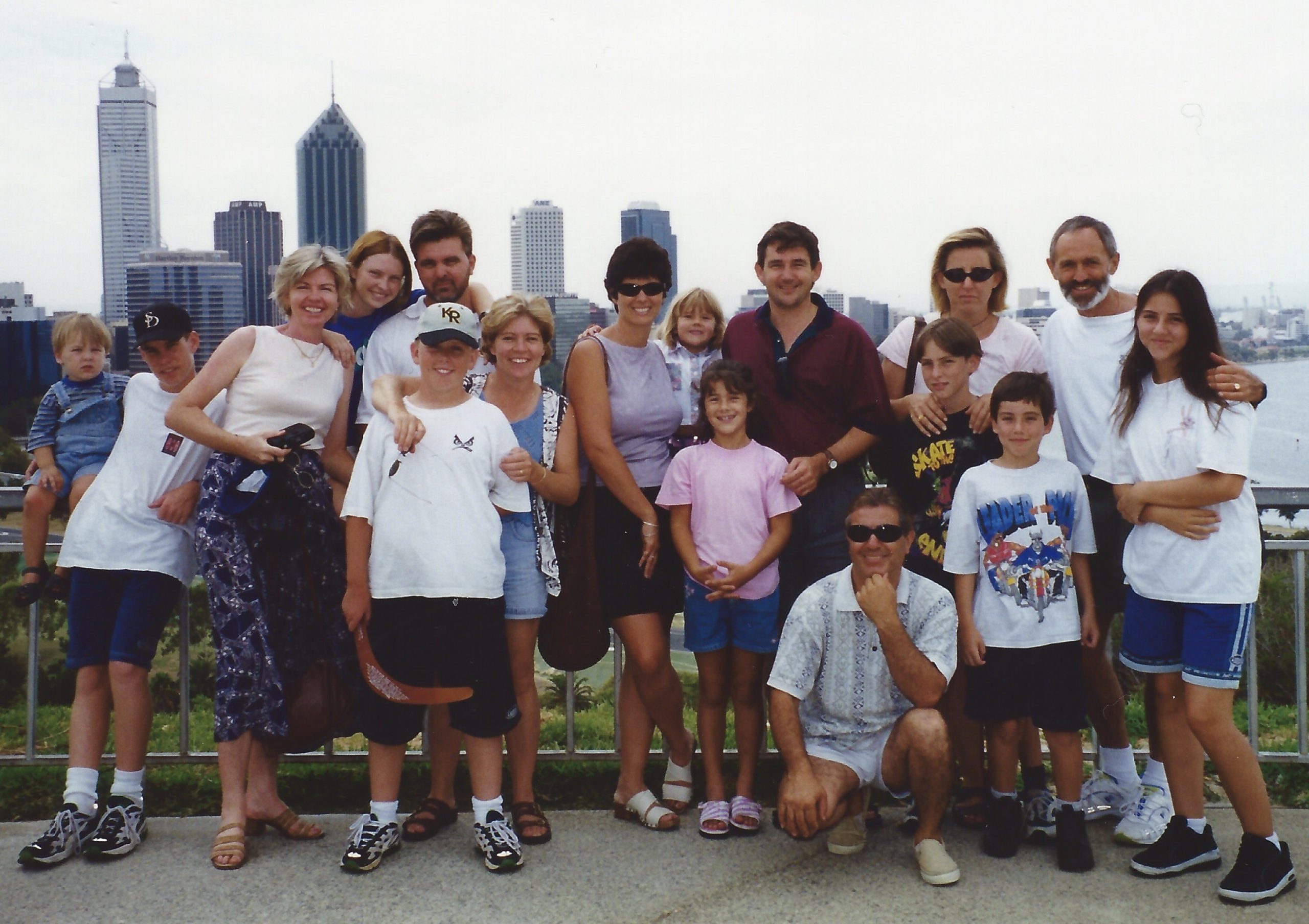 Marilyn arranged a picnic in King’s Park on the Sunday before we left, and that evening we were the honored guests of D’Hange and Abby for dinner. D’Hange presented us with a beautiful picture of Perth Harbour that he had painted especially for us during the picnic. What a perfect souvenir of a memorable visit.

All good things come to an end and before we knew it we were on the plane heading towards Sydney before making our connection to LA. We’ll be back, and next time we want to visit Melbourne, Adelaide, the outback and other places we simply couldn’t fit in. Until then, thanks to our many friends (old and new) who made our trip so special. G’day, mates! No worries!