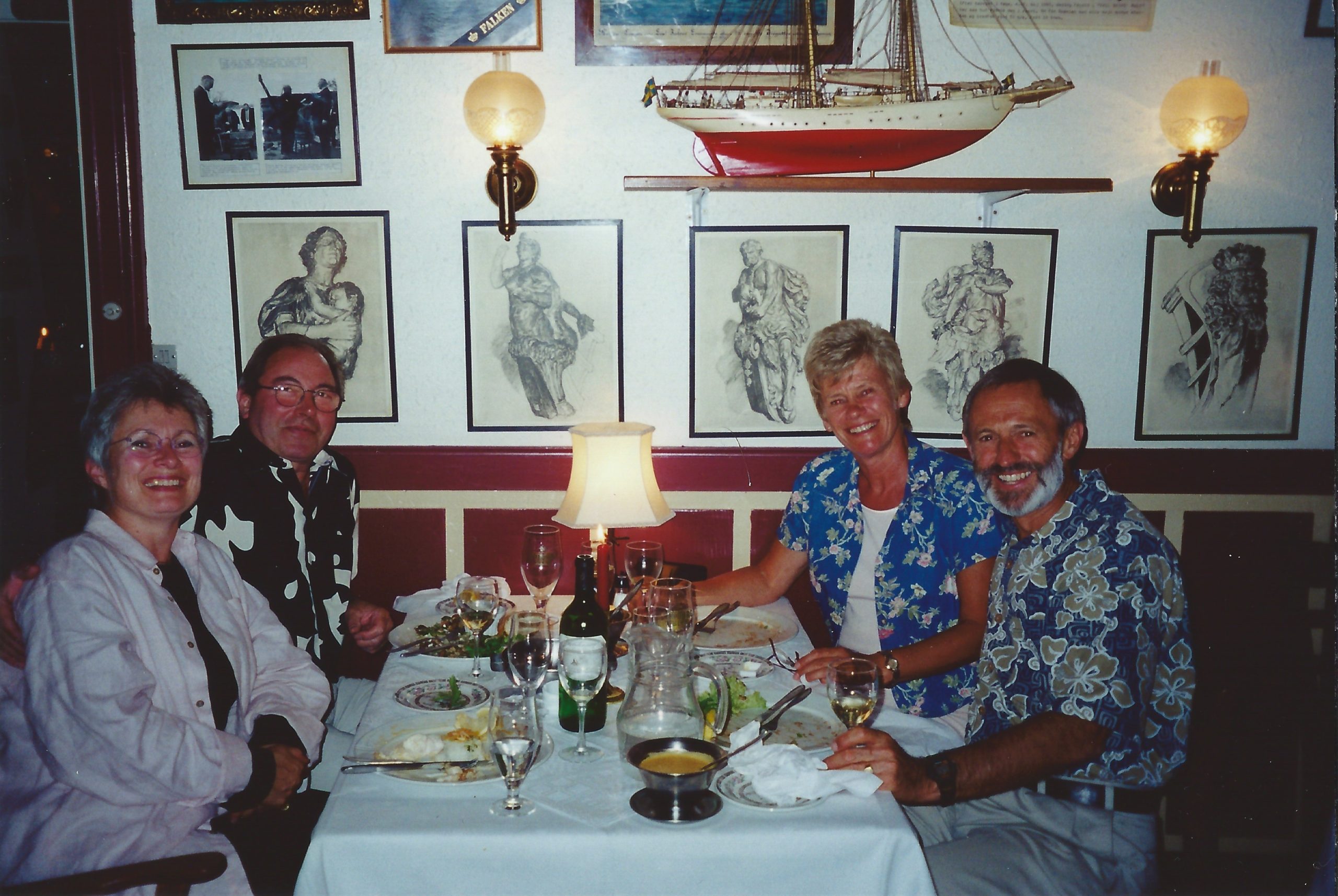 As the taxi approached Heathrow Airport the rain began to fall – a sure sign that it was time to leave England behind. Our good friends, Anne and Charli, were waiting for us at the airport in Copenhagen and it wasn’t long before we were relaxing by their pool. Charli lit the barbecue and soon we were sitting down to a wonderful meal. We were last here three years ago and it felt so good to be back.

As well as being a close friend, Anne is our business partner in Denmark, so we knew we had work to do. Over the next few days she arranged for us to meet with several of her friends interested in health and nutrition –  fortunately most people in Scandinavia speak excellent English! It was also an honor to be guest speakers at a local health and wellness seminar. We found plenty of time for sightseeing during our 10-day stay and managed to explore much further afield than on our previous visit, the highlight being the beautiful white cliffs at Mons Klint.

The following week, we set off in a rental car to drive the 900km (approx. 550 miles) to Stockholm to see our friends, Tommy and Marianne – a great way to see more of both Denmark and Sweden, where the “right side” of the road is the right side! The trip involves a 45-minute ferry crossing – no need for reservations as the ferries run every hour or so. It was an interesting drive and I’m sure the scenery was spectacular – too bad that it rained heavily the entire way! 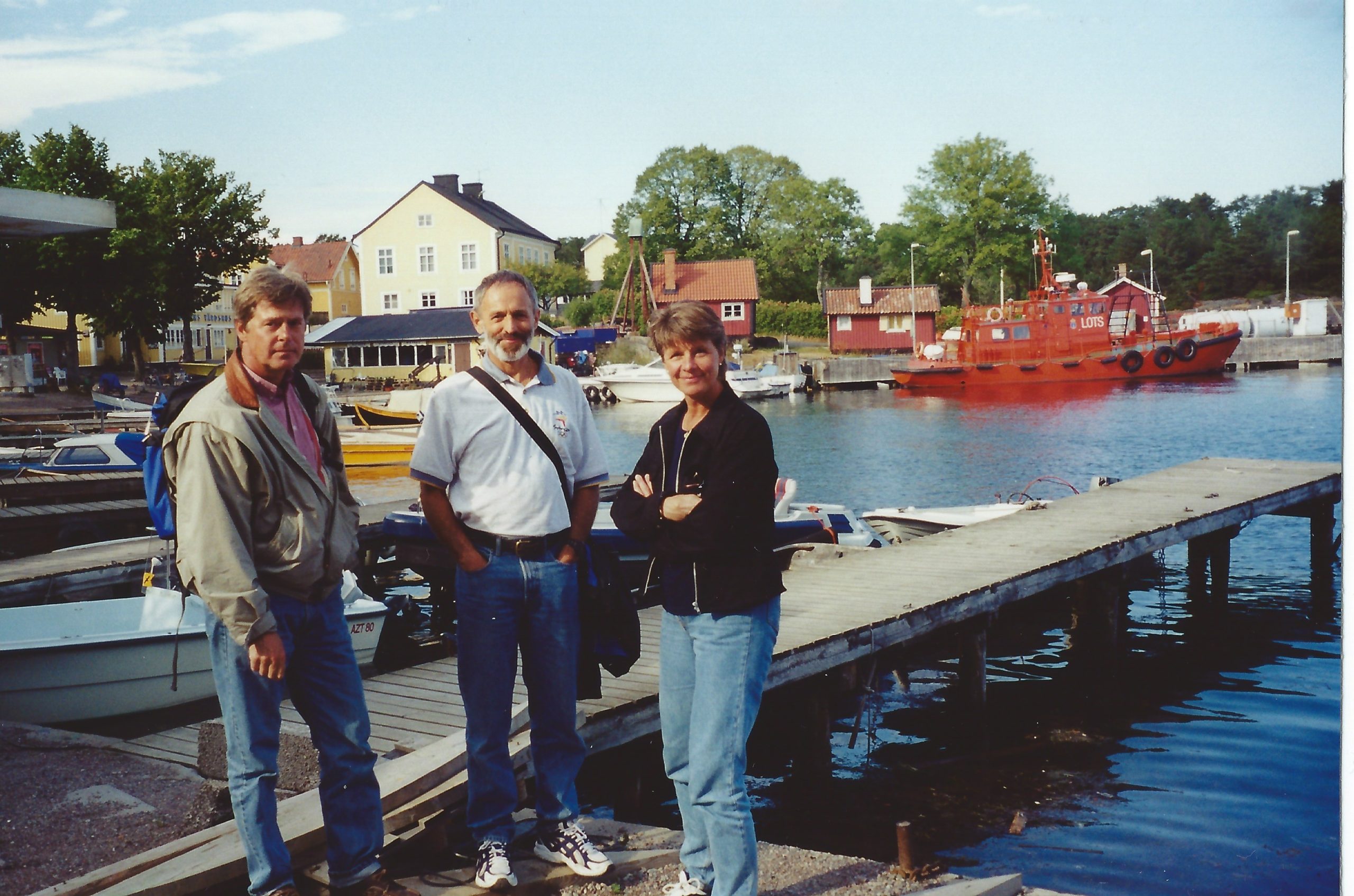 Stockholm is surrounded by water, and Tommy and Marianne took us by boat to Sandhamn, one of the thousand islands that characterize the archipelago. No cars are allowed on the island and few people live there year round, but it’s a popular retreat in the summer months. There’s a small harbor and a couple of restaurants and churches – a true Paradise Isle! 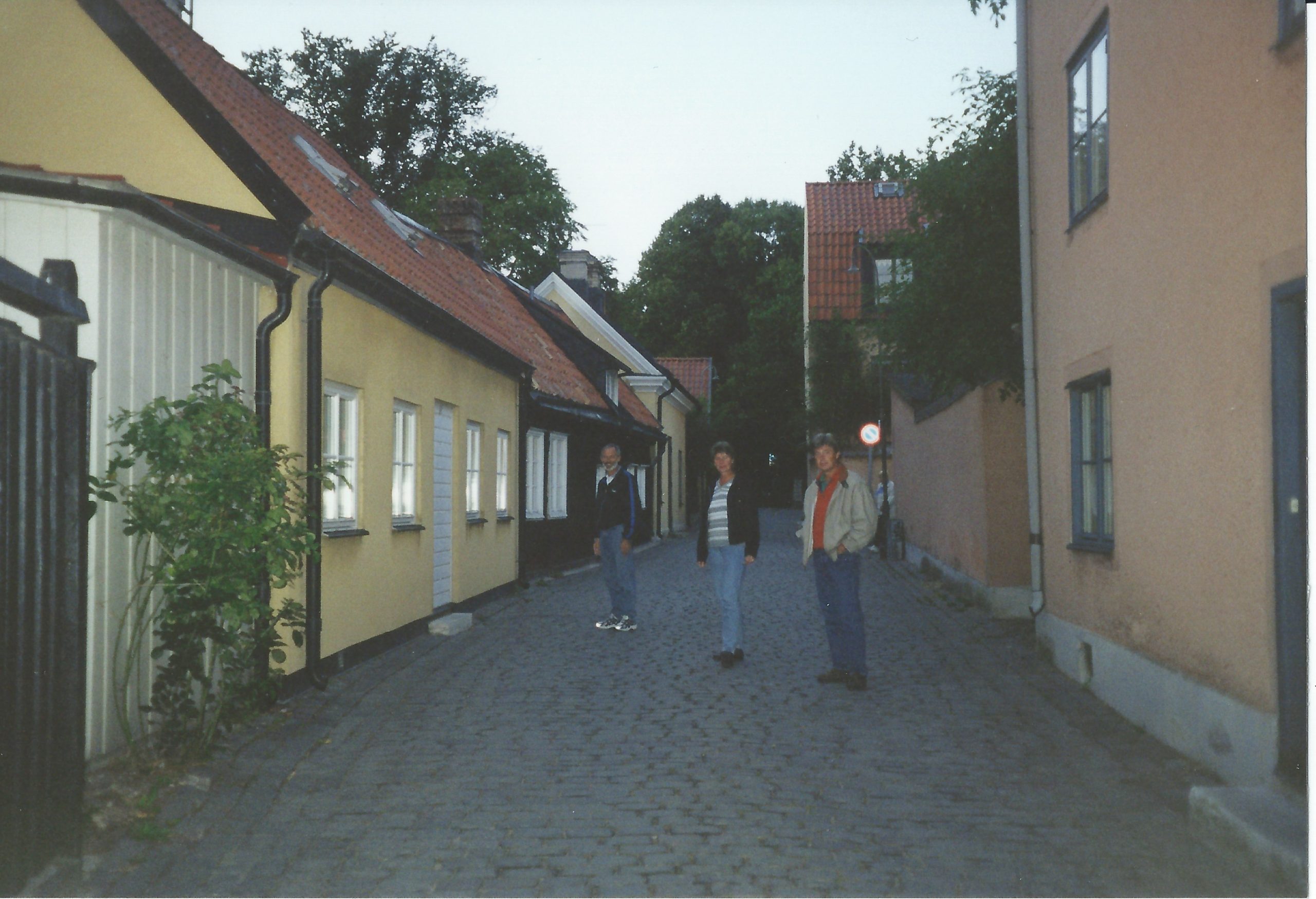 The highlight of our stay in Sweden was a visit to the island of Gotland, a 4-hour ferry trip off the east coast of Sweden. The main town, Visby, is fascinating and has changed very little since mediaeval times. We stayed overnight in one of the few hotels, which gave us plenty of time to explore the island, with Tommy and Marianne’s son, Magnus, as our guide; he’s a student at the University in Visby.

All too soon we had to say goodbye. We took our time driving back to Copenhagen, spending a night on Sweden’s west coast, and exploring small fishing villages and the beautiful city of Gothenburg. It was a glorious day and we took a boat trip around the city.

Then it was back to Anne and Charli’s, for a final, sad farewell.

The following day we set off on the next leg of our journey to Germany, by train. Traveling by train in Europe can be quite an adventure; you need to make sure that not only are you on the right train, but on the right section of the train, as they have a habit of dividing along way. Anne dropped us at the local station where we bought tickets to Copenhagen. Once there, we were able to purchase tickets for the boat train right through to Lübeck in Northern Germany – yes, the train actually goes on the boat. Well, in theory, at least. Not speaking any Danish, we found it very difficult to understand that only the main section of the train would go on the boat; the passengers in our section had to get off at the docks, walk onto the boat, and then pick up the train again the other side. Would you believe that, having hauled our entire luggage off the train, along the platform and up several flights of stairs (not an escalator in sight), we reached the quay just in time to see the boat leaving without us! Fortunately, both boats and trains ran pretty frequently, so it wasn’t a total disaster.

It was only a short walk from the station in Lübeck to the Avis office where we had reserved a car. If you’re planning to rent (or “hire”) a car in Europe, we suggest you call Auto Europe here in the U.S. before you go (1-800-223-5555). They use the major car rental companies but their rates are very competitive. We found them totally dependable in Denmark, Germany and Spain. But note that it’s extremely expensive to rent a car in one country and return it in another — drop-off charges alone can be as high as $1,000! 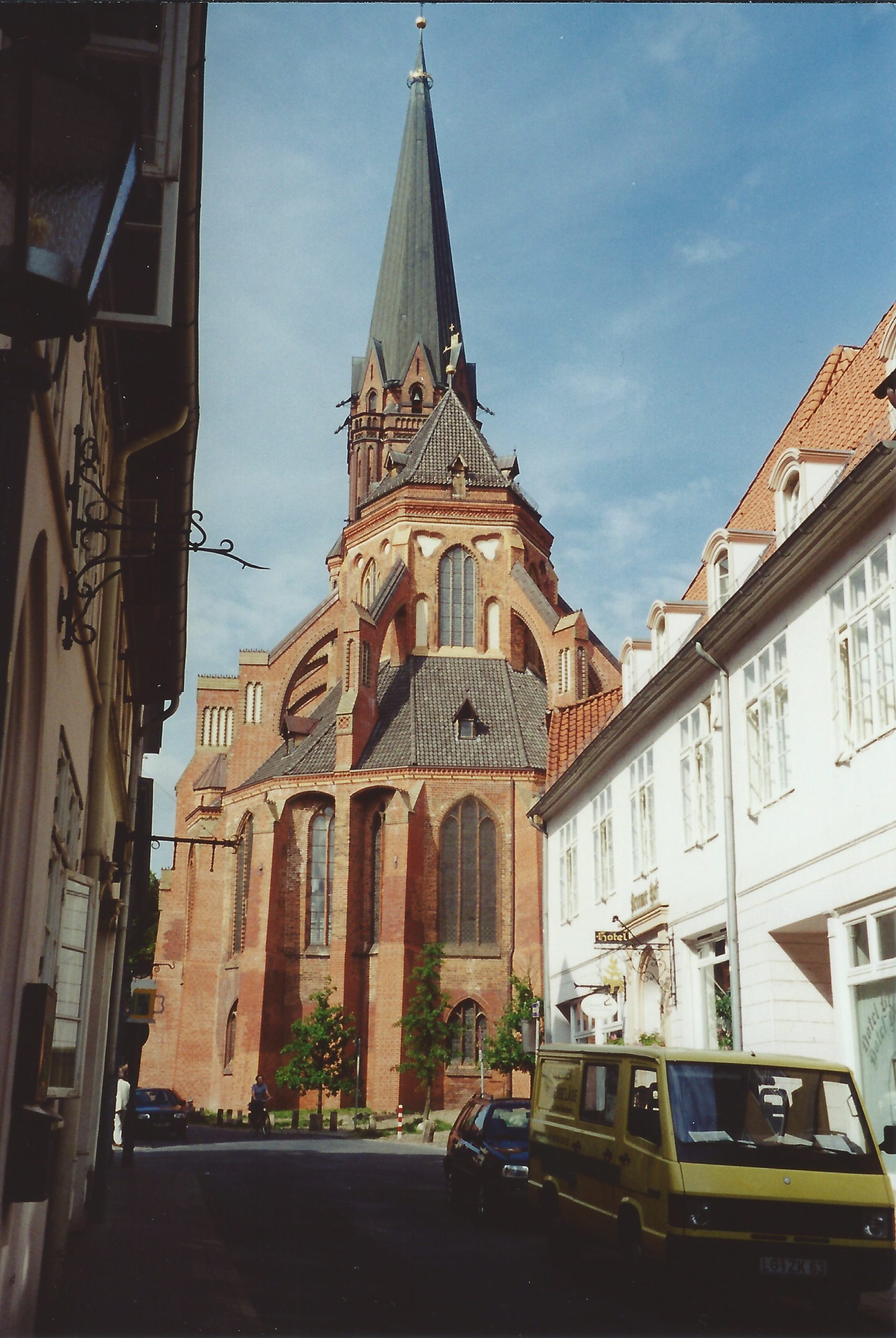 We drove to the beautiful city of Lüneburg, an historic salt town on the river Ilmenau, dating back to the year 956. Once one of the wealthiest towns in Germany, today it’s a prime example of medieval brick architecture. We found a great little B&B, and spent the day visiting churches, exploring the many cobbled streets and enjoying the local cuisine (Mick: and the great beer and wine!)

From Lüneburg we drove to Wolfenbüttel, stayed in a nice little hotel, and next day continued to the Hartz mountains, where we hiked part way up to the Brocken, northern Germany’s highest peak. Sadly we didn’t have time to go all the way to the top. This was disappointing for Mick, who studied Goethe’s Faust at university and the Brocken featured prominently in the famous novel. It’s the site of the annual Walpurgisnacht (St. Walpurga’s Night) gathering, when, according to ancient legend, witches and goblins met to celebrate. 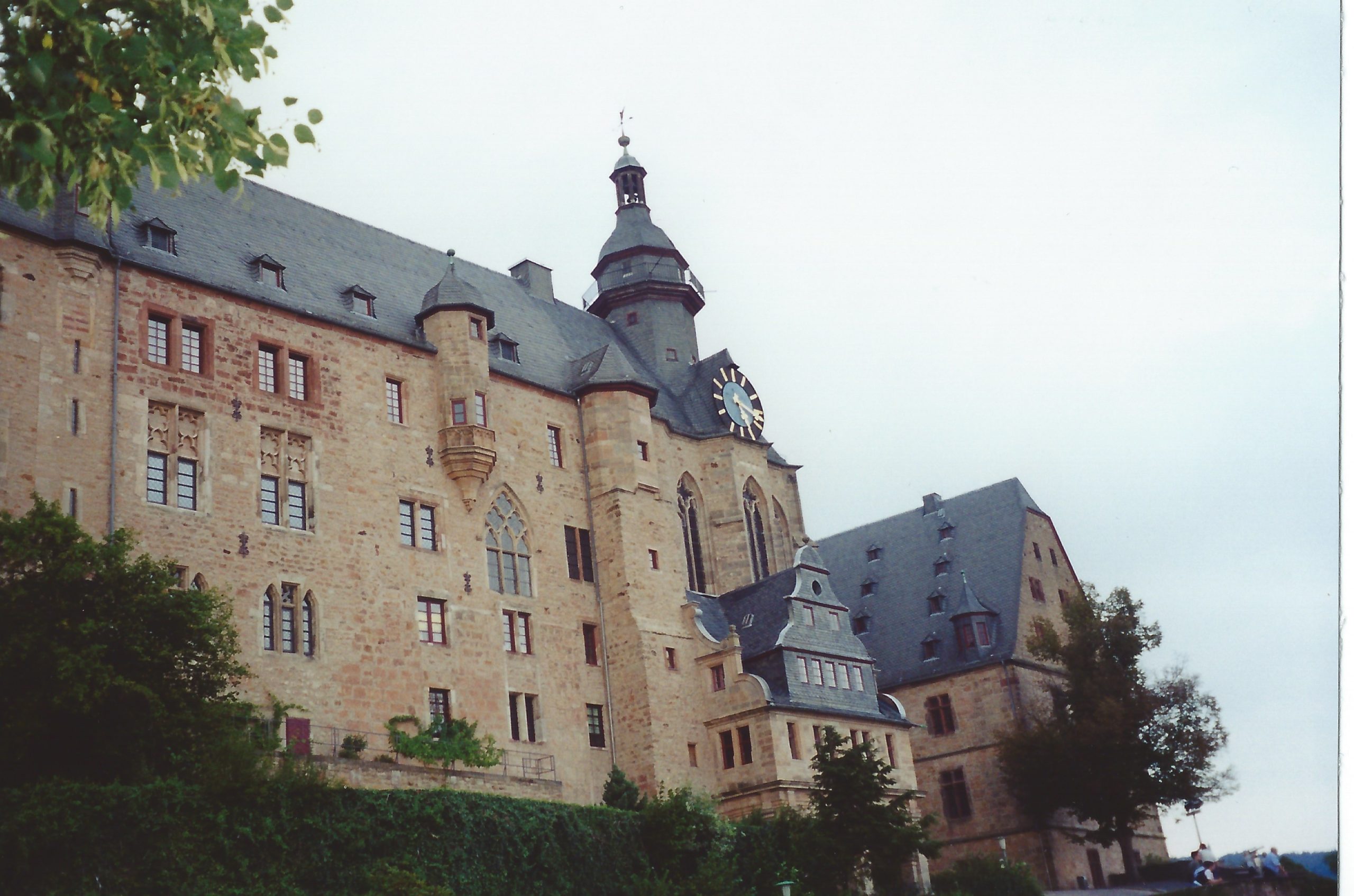 Next stop, Marburg, famous for it’s lovely Altstadt (old town) and the spendid Elizabethskirche (church). Mick was very excited as he had spent four months here as a student thirty-four years ago. Unfortunately the memory fades as we get older, and he had to admit that little looked familiar! Built on a steep hillside, we walked, walked, and walked up and down the steep, cobbled streets of this lovely university town, and visited the formidable castle which looks down on the surrounding countryside. 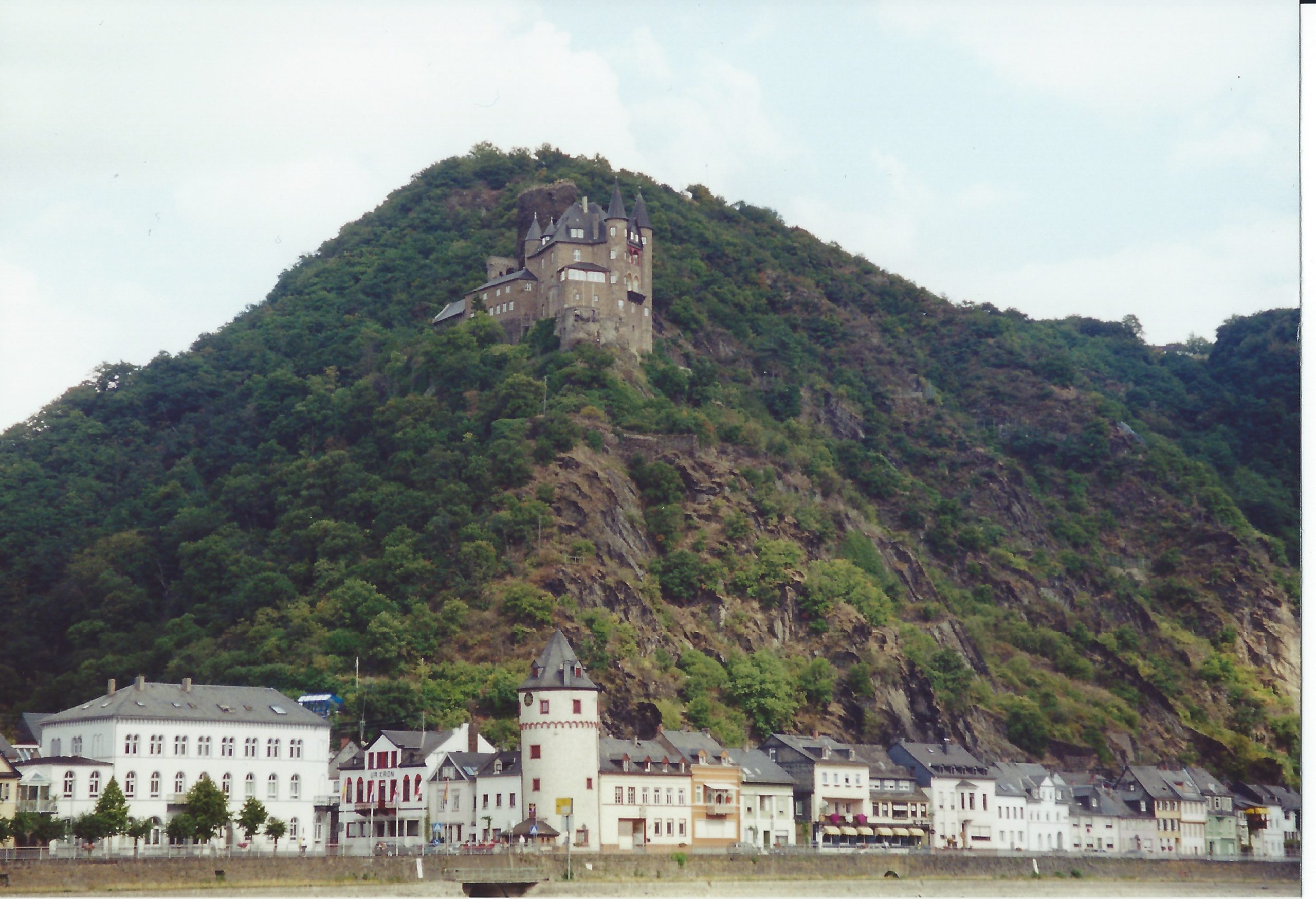 In my opinion, no trip to Germany is complete without a boat trip down the Rhine to see some of the most spectacular castles in the world, so now it was my turn to get excited. It was a beautiful day as we boarded the boat at Boppard and began our 4-hour journey down the river, past Burg Maus, Burg Katz, the famous Loreley, Burg Reichenstein and many others. (Interesting piece of trivia: did you know that a “Burg” is a castle, while a “Berg” is a mountain? I didn’t!) As we passed Schloss Schönburg, which has been watching over the Rhine for more than a thousand years, we learned that today itoperates as a 5-star hotel and, well, we simply couldn’t resist. (I also learned that “Schloss” is another word for castle – all very confusing.) That night we indulged ourselves with a beautiful suite, complete with four-poster bed, overlooking the legendary river, and had dinner in the magnificent knights’ dining room. Truly an unforgettable experience.

The following day we continued driving down the Rhine to Heidelberg, another famous and very beautiful university town, with a magnificent Schloss.

A pretty drive brought us to the Black Forest in the southwestern corner of Germany, where we stayed in a nice B&B in Titisee, on a glacial lake. The next day we hiked the Wutachschlucht, a beautiful gorge, known as the “Grand Canyon of the Black Forest”, with about 1200 types of wildflowers, rare birds and countless butterflies, beetles and lizards (though we saw few of these!) This was a “good” hike, covering about 9 miles in 3 hours. From here we drove to Konstanz and took the ferry across the Bodensee (Lake Constance). This lake is a perfect “cure” for travellers stranded in landlocked southern Germany. After driving on to Lindau and checking into yet another B&B, Mick ran around the Insel (the town center is an island) — this is the way he prefers to do his sightseeing! That night we saw one of the many spectacular sunsets that will always bring back fond memories of our trip.

This entire 9-week tour of England and continental Europe was spiritually, emotionally and physically energizing. We did far more walking, hiking and running than usual, and the fabulous weather allowed us to fully enjoy the superb scenery in this part of our world.

From Lindau we drove to Füssen to see the famous fairytale castles, Hohenschwangau and Neuschwanstein, which inspired the Walt Disney’s Cinderella Castle. Predictably, the castles were shrouded in cloud and mist and looked very eerie!

Finally we arrived in Munich, where, after a lovely walk around the Englisher Garten, it rained – another sign to move on! I have to let Mick write this piece, as the highlight for him was our visit to the BMW Museum. 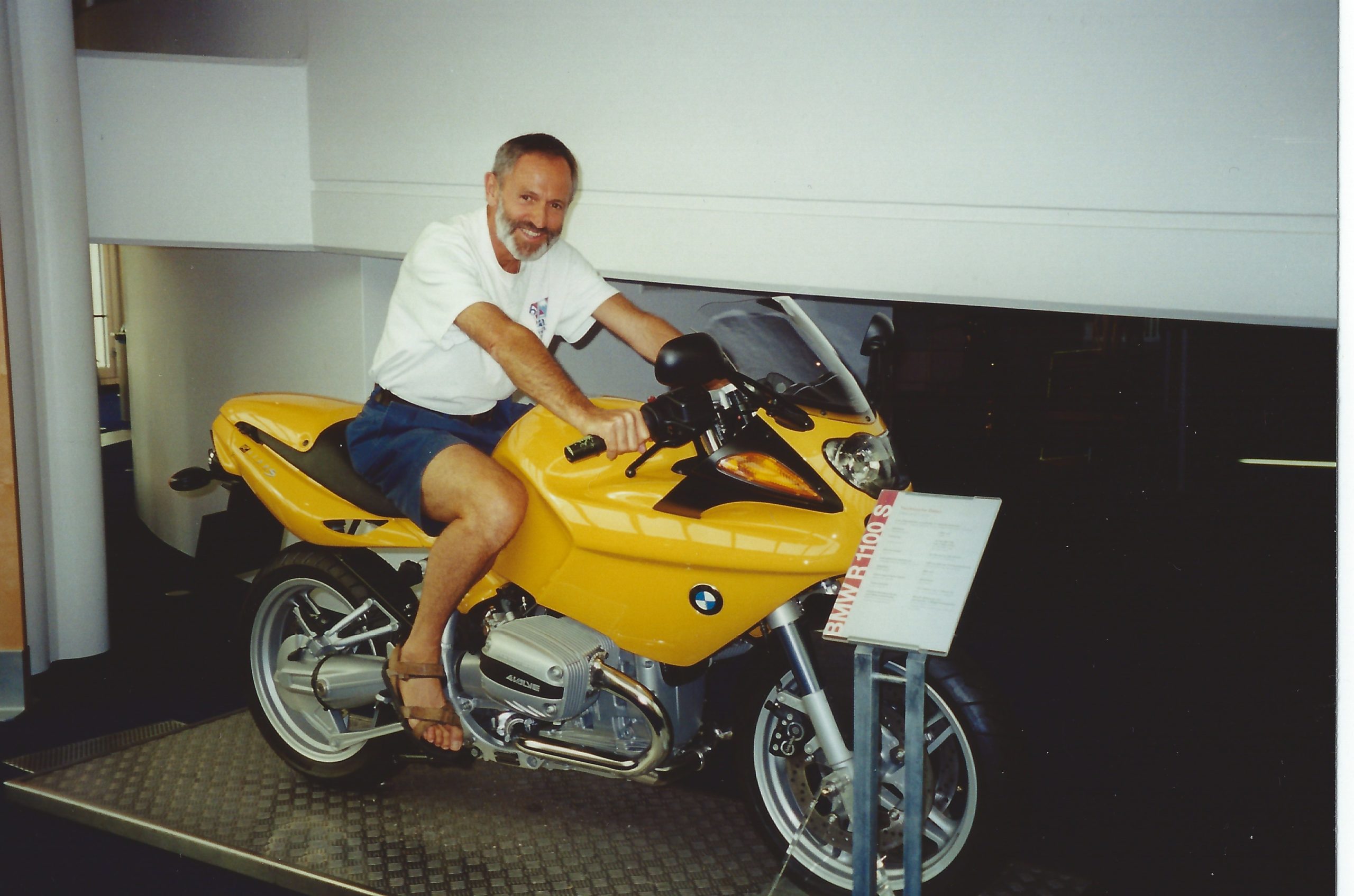 Mick: the Bavarian Motor Works (Bayerische Motorwerke) is famous for its fine examples of German auto engineering. As much as I admire the BMW sedans and sports cars, my real love, since my teenage and young adult years, has been BMW motorcycles. Although I’m still a great fan of the “British superbikes” (especially Norton Commando and BSA Goldie), the BMW is truly the “king of the road” (apologies to Harley enthusiasts!). The museum was fascinating and here’s a picture of the BMW R1100S, which I plan to buy once we settle down again. Imagine cruising the Rocky mountains on that beauty!

You’ll notice that throughout our trip we made no hotel reservations in advance. August is probably the most popular time for tourists, yet we had no problem finding accommodation. The Lonely Planet Guide was enormously helpful, giving very candid descriptions of places to stay (or to avoid!) as well as sites of interest. Wherever you plan to travel, we would highly recommend Lonely Planet Guides.

Join us for the finale of our European adventure in Spain.